If you’re at all engaged with corporate travel news or pay any attention to the tech hype machine, chances are you’ve heard of . It exists in most people’s mind as the latest tech craze, simultaneously making some early adopters very rich and provoking condemnation from heads of state, economists, and bankers.

But what is it really, and how is it being applied to corporate travel? Are we on the brink of a paradigm shift, or amid another short-lived bubble?

is undeniably a feat of genius. Originally created as an alternative to bureaucratic centralisation and big tech by mysterious net libertarian Satoshi Nakamoto, it’s since become something with far greater potential than its beginnings as a utopian experiment. But what is it?

A blockchain is a decentralised, public ledger in which transactions made in bitcoin or another cryptocurrency are recorded chronologically. It constantly grows as “completed blocks” (the most recent transactions) added to it and recorded. Each node—a computer connected to the network—gets a copy of the blockchain which is updated automatically.

Once completed, a block goes into the blockchain as a permanent database and each time this happens a new block is generated. There is a potentially limitless number of such blocks in the blockchain, connected to each other (like links in a chain) in proper linear, chronological order. Each block contains a hash of the previous block—meaning that collectively the blockchain has a complete record of every user and every transaction they've been involved in, from the chain's genesis through to the most recently completed block.

The blockchain was designed so these transactions are immutable; blocks are added through cryptography, ensuring that they unalterable by any user. In essence, the record can be distributed but not copied or tampered with and its authenticity verified by the entire community using the blockchain instead of a single centralised authority.

For market participants, this means greater faith in the integrity of transactions— the record is quite literally meddle-proof—as well as the possibility of engaging in a market with no centralised point of distribution or control, something which we'll see is particularly relevent to travel. 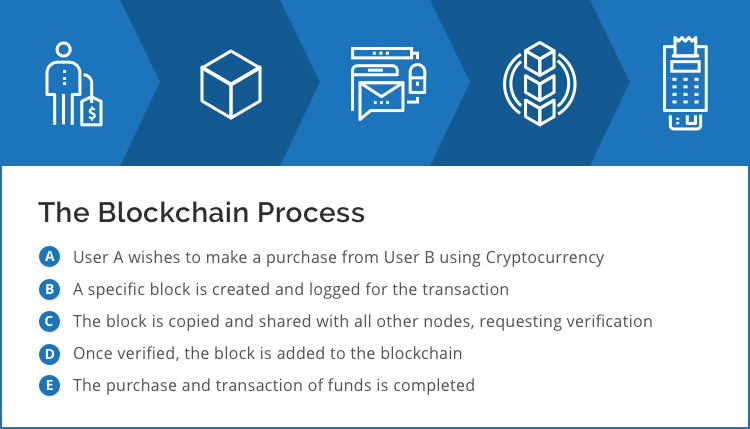 While it was originally developed as the accounting function of virtual currency Bitcoin, blockchain can theoretically be used in any number of commercial settings. Distributed ledger technology (DLT), which blockchain rests upon, can digitise, code and insert virtually any document into the blockchain. This creates a permanent record that cannot be altered and is verified by the entire community using the blockchain instead of a single centralised authority.

In plain English, this means the technology can be applied to anything that requires a continuous record or the distribution of information.

How Is It Being Applied to Corporate Travel?

As you’ve probably guessed, blockchain’s flexibility makes it a very interesting proposition for the travel industry.

Numerous start-ups have sprung up—all pitching a blockchain revolution in travel—although it must be said, results vary. On the one hand, there are businesses such as Winding Tree who plan to use blockchain’s distribution capability to create a decentralised repository of travel content­—aiming to cut out the GDSs in the process.

On the other, there are many, many firms for whom blockchain is little more than a vehicle to make a quick buck. You know the sort: the kind of businesses that appear in the first few years of any technological innovation, quick with buzzwords like “transformation” and “disruption”, scant on the details of how the industry-shaking metamorphosis is going to happen.

At the moment the world of blockchain and cryptocurrency start-ups is something of a wild west and corporate travel’s small corner of the industry is no different. Sifting out the genuinely revolutionary ideas from the bad isn’t easy, but that doesn’t mean there aren’t good propositions out there, or that blockchain is without potential.

Could it Transform Corporate Travel?

So, could it work?

Taking the positive first, blockchain's potential use as an alternative distribution system for corporate travel could be huge. Hoteliers and airlines have long lamented working with intermediaries: it means commissions, limited access to traveller data, and overdependence on a small cadre of global players.

Blockchain could, in theory at least, drive down commission fees and disrupt the current GDS model­—by providing a decentralised distribution system that eschews expensive transactional fees and barriers to entry. This would allow suppliers such as hotels and airlines to distribute inventory directly to points of sale, bypassing costly intermediaries and bottlenecks to data. For TMCs, it would mean access to a wide range of suppliers with no markup fees and no barriers to entry, giving smaller businesses the opportunity to compete with GDSs.

In today’s global economy, enterprises are spending exorbitant amounts on travel. So, if blockchain can power the backend and create a commission-free system that delivers real savings, then those same companies will build the interfaces that connect them with air and hotel products.

Some have also pointed to blockchain’s potential to provide the digital bedrock for AI and voice search in travel, although discussions on how to achieve this haven’t moved much beyond conjecture so far. Meanwhile, others are more excited about its capacity to change the way loyalty programmes and payments work.

On the flipside of the coin, there are a couple of very large caveats attached to blockchain. Firstly, it has the distinct whiff of another dubious tech “goldrush”, think the dot-com bubble in the late nineties, and may well burn out long before it reaches industry changing proportions.

Secondly, the current negative press surrounding Bitcoin’s rather inevitable fall from grace may well put many would-be adopters off using blockchain. The two are indelibly linked in the minds of many investors—after all, the way most people heard about blockchain technology was through its relationship with Bitcoin.

In reality, the long-term outlook for blockchain's use in corporate travel is difficult to predict. The technology has undoubted potential, and, at the very least, its momentum should force a conversation between suppliers and intermediaries about cooperation. Whether it has a truly transformative effect will depend upon enough businesses taking the plunge and signing up to a public blockchain marketplace.

It may well be that the current wave of blockchain start-ups will have to crash and burn to make way for something more refined, as is often the way with ephemeral tech innovations. Either way, now the technology is out of the bag it's sure to have interesting implications for corporate travel.

At Mantic Point we pride ourselves on keeping a finger to the wind, to learn more about the future of business travel, download our roundtable with five thought-leading travel experts.